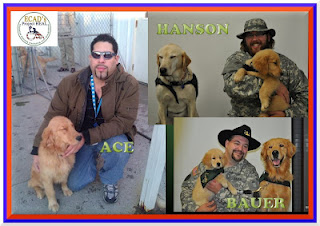 Boone recently was evaluated by one of his home for the weekend handlers and this is what they had to say about him.  Boone is very friendly and gentle and walks on his leash well, he seems very advanced for his age and has no problems when other dogs pass by him on the trails. He is a bit of an early riser in the morning. He likes to smell everything and gets excited meeting new people but is fast to calm down . He has very good house manners but will pick up items off the floor is he has the opportunity. He is quick to "release" when commanded to. All around he was described as bright and affectionate and a pleasure to have around the house. Looking good Boone! 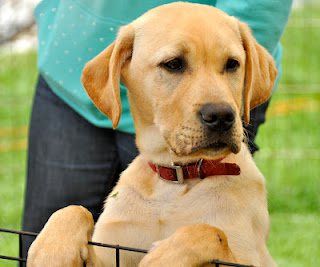 Uno is doing very well when it comed to tugging the laundry basket in a straight line, which is a big improvement from the last update. He is still a little to excited when asked to get his leash and is working on it. He is working on his leave it (items on the floor) . 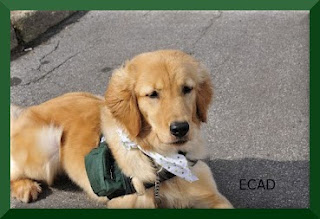 The pups of the Designer litter are moving right along! Armani is excellent on turning on the light switch  on and is doing very well. With a stronger student handler he is staying on point and not as playful about his tasks. Armani is staying in the "up" position longer with a lot of positive motivation.

Chanel is geting really good at "up" and then retrieving items off the table. Her hold is excellent. Her Drop is good but have to work on getting the items in the laundry basket when dropped. Chanel will do the light switch board but still needs to be targeted with treats. Her tug is improving.  One of Chanel's home handlers report that she is a very calm dog. She reads people well and either sits or lays down when her handler is stopped to talk to people. Chanel went to a baseball game over the weekend and sat calm and still under the bleachers, she did not try to eat any of the goodies that had fallen under the bleachers.

Gucci was working hard at the Graham School and has been doing some successful stair work. Gucci is coming along very well and is very attentive in all his positions and commands.

One of our recent team training graduates, Beth , came by for a visit to the training center and and showed us how great of a team they have become! 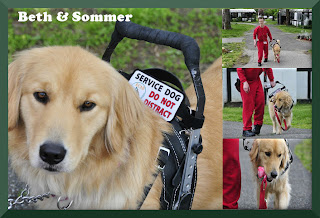 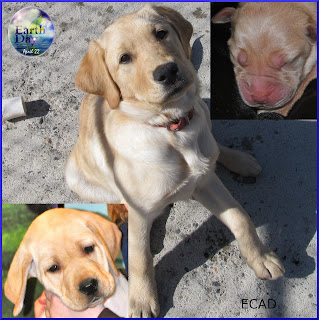 Shiloh's Puppies are growing up fast!
Posted by ECAD at 11:56 AM No comments: 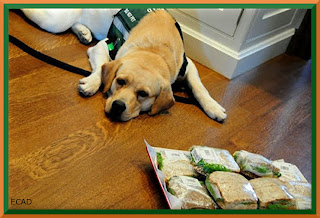 Service dogs must ignore temptations that other dogs may not. Russ Jr 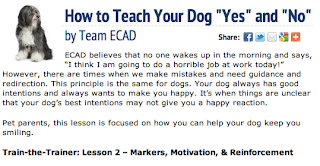 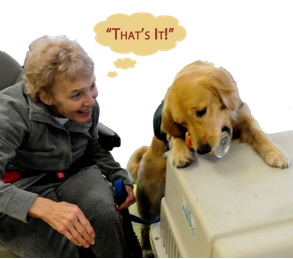 ECAD Instructor Adam demonstrating the command "Fix It", Fix it is used when the dog gets the leash positioned under is leg hindering movement and control. Lets check out that this looks like! 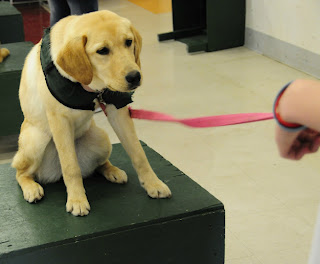 Now we want to use our basic starting commands of dogs name and "watch me" so you have his attention. Then tell him to "fix it" applying slight touch of the leash on his leg. With some treats and time this will become second nature to him just needing to here the fix it command. 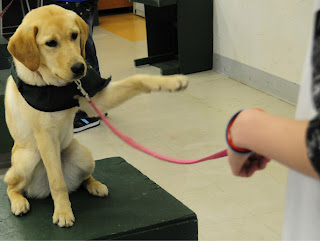 Now the handler can slip the leash back to its proper position without having to physically bend down. A lot of our clients can not bend down and this is how they would fix this problem. 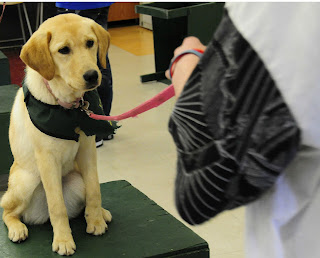 All Fixed!!!! Hope this helped you to understand more about service dog commands!

How to call your dog by name (and have them listen)

ECAD sponsor PetCareRx  is running a series of articles on basic puppy training please click the link below and check out the first article ! 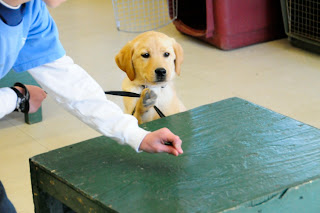 
Puppy Love features interviews with Lu, Phil and Luis and features some of our past Children's Village students along with Reece,Tuesday and many more ECAD dogs! 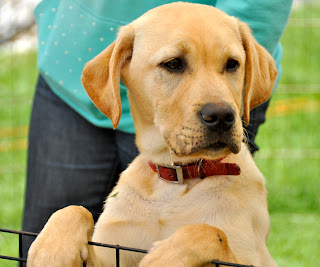 Uno was  Shiloh's first puppy and only puppy in the litter. As you all know Shiloh's second litter consisted of 13 puppies! Like the second litter Uno is a Dane/Lab mix.  Uno is true to his name and is one of a kind! Here are some training updates for Uno.

Along with some other service dogs in training , Uno, took a walk on the trail and worked beautifully! Uno was not distracted by his buddies or other animals and stayed focused and on task.

Uno's "Look"- Look is one of a stream of commands that will start with the dogs name,Uno watch me! To get the dog focused that a task is coming. Once we have Uno's attention the next command is "Look" , the trainer will look at the item you want Uno to get and point to the item. "Get it". "Get it" will make Uno go to the object and pick it up in his mouth. The command that follows get it is "Hold it" asking Uno to hold it in his mouth and not play with it. That is where Uno is in that string of commands right now more to come on the finish of that command string.

Uno was a busy boy these past few weeks also working on "leave it" , Leave it simply means for the dog to stop focusing on whatever he is focusing on. Uno's vice it chewing paper, he is doing well with the verbal correction of "leave it".

Uno has been working on tugging a crate, which will be helpful in pulling a cane, prosthetic and even laundry basket if his future handler may need that skill. He's not quite pulling in a straight line yet but is improving none the less.

Uno took a trip to Stop & Shop and was excellent in his positioning and behavior in the store. 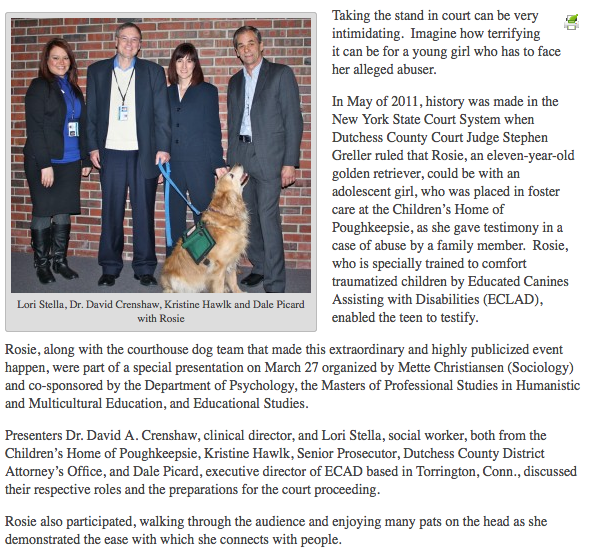 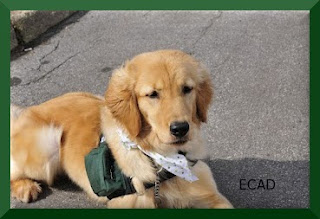 
Hi everyone here are some updates on the pups of the Designer Litter and Veterans Litter.  Spezzano is working on the light board ( turning light switch on and off), and doing quite well.  Spezzano also went on a trail walk with a group of ECAD pups in training including Hanson, Hazelton, Dior, Boone and Uno. All dogs were on task and not overly distracted. Hanson and Boone the babies of the group were on task for their age and not overly distracted.

Armani- Armani is doing very well at turning the lights on and off. Armani is trying to be be better about tooth bushing. Tug, sit, and hold are also being worked on. Armani is doing well on not being distracted by balls and loud noises.

Chanel- Chanel is working on her light board training and is targeting with the assistance of treats!

Dior- Dior is getting close to the light needs a little work on hitting the target.  Dior is quite the tugger tugging heavy laundry baskets through narrow spaces! Dior's  hold is excellent and is improving on bringing objects directly to your hand.

Any questions or comments feel free to leave in comments section and will get back to you ASAP! Have a great day! 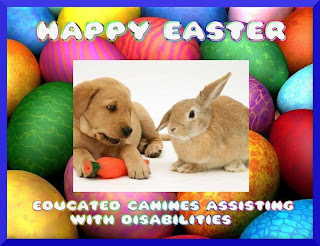 An experience from ECAD client Lee and her Service Dog Brady.


Went to the craft store with Brady yesterday. While looking for some crafts in the frame department Brady suddenly noticed one of the stores employees and wanted to go toward her. He went and sat at her feet and offered his paw.

Her face lit up and she asked if she could pet him. When she leaned down to pet him he gave her on lick on the face. Hmm , that's a new one I thought.

After talking with her for some time it turns out she use to work in the world trade center and had been in tower one on September 11th. She went to tell me how she suffered from PTSD and was housebound for two years. Her biggest challenge during that time was going down her driveway to get her mail. She often did not get far before becoming overwhelmed and sick and retreating back to the house to clean up.

We let her snuggle with Brady for a little while before promising to come back soon to visit again. Brady amazes me everyday for sure and im sure glad he does. I get to meet the most interesting and nice people, who usually have some stories we can relate to and share. 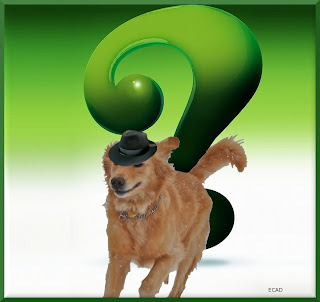 "There is no psychiatrist in the world like a puppy licking your face."
-Ben Williams
Posted by ECAD at 11:35 AM No comments: 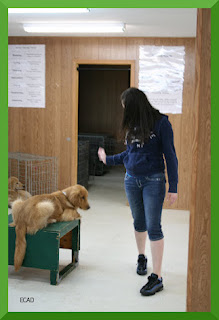 The STAY command is taught by placing your dog up on his jump box .
Good boy Ace! 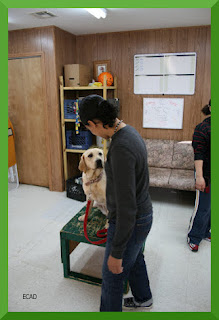 The student asks the dog to "watch me". Watch me will have your dog look you right in the  eye ready to receive his next command . Great "watch me" Barcelona". Bauer has now been given the command "stay" and his student handler walks around his jump box repeating the command to stay. 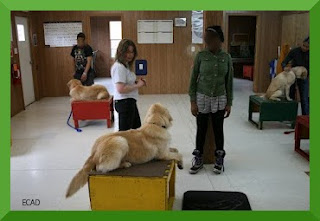 Nook as been given the command "stay" and the student handler moves back away from the box. 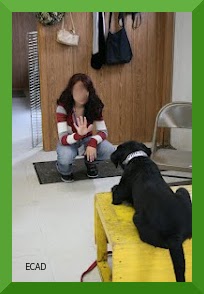 Sevilla listens intently as her handler takes a seat a distance away repeating the stay command along with a hand signal.


So there you have it the process of the stay command as demonstrated by the students at JPFCS.

Thanks for the great photos Lia!

Commands with Phil and Adam 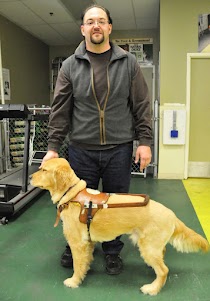 
Block is when you ask your Dog to stand in front of you creating a barrier between you and usually other people in front of you , the dog will stand very close you your legs so you can feel him there. This command is used a lot by clients with PTSD as it gives them the space to make them feel comfortable around other people and the a feeling of having your dog close to remind you everything is ok. (looking good phil!) 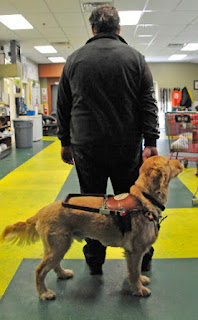 Cover is the exact oposite of block and is used for the same purposes .  Clients with PTSD are often hyper-vigilant, meaning they are always checking their surroundings for possible threats to themselves, having your dog behind you makes you feel "covered" from what is behind you . The dog is pressed close to your legs again giving you the feeling of being more comfortable knowing he literally has your back. 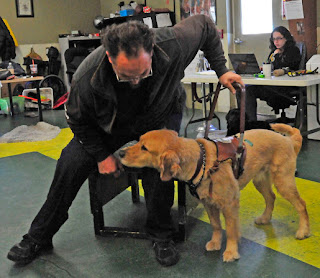 
Brace is just like it sounds , the dog will stand still while you use him to brace yourself in order to stand up, walk down stairs any activity requiring a helping hand. Full body weight is not placed on the animal but used as a brace, as Phil is demonstrating in the picture pushing off of the box while using his partner to brace.


Walking with a Stability Harness


A stability harness is used to give a person with balance issues that extra help to be able to walk freely. The dog is not used as a cane or a crutch and should never be pushed down on. The dog gives you the extra little bit of balance needed to get around through the stability harness. 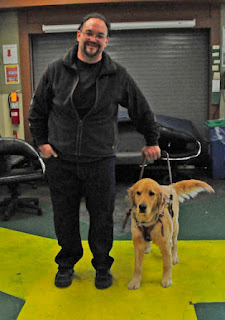 Support with a Stability Harness


A stability harness also helps a client keep their balance while standing, again the dog is not being pushed down on he is just there for that extra support making it more easy to  function independently.


Hope you all have a better understanding of some of the functions a service dog provides! See you next time!