Enjoy our video of our anual fundraising event. Thank you to all the staff, volunteers and guests who made this event a great success! 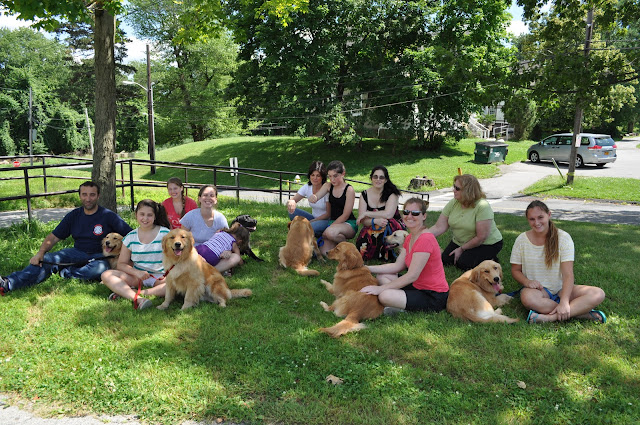 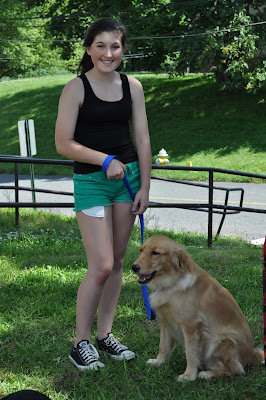 Our pack increased by six new family's this weekend as a new class graduated our "Home for the Weekend" program.  Our new Home Handlers will we assigned to different dogs to take home for the weekend helping getting them acclimated to living in a home environment and reenforcing basic commands.

They are an important piece of our program and we thank them all for their volunteerism and help with our Dogs. 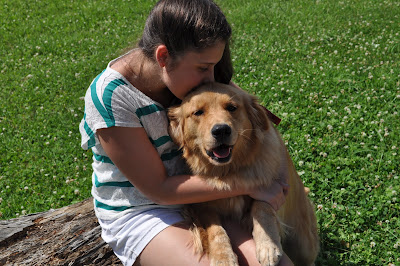 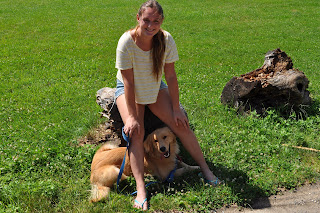 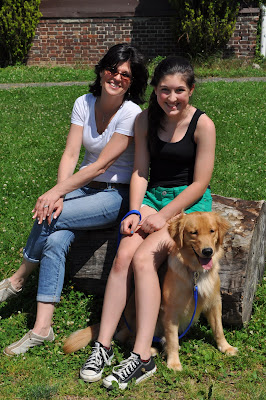 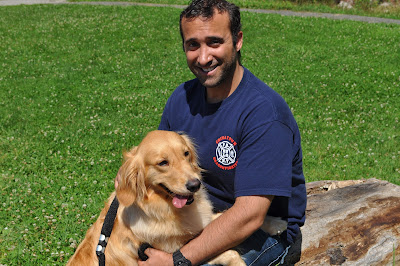 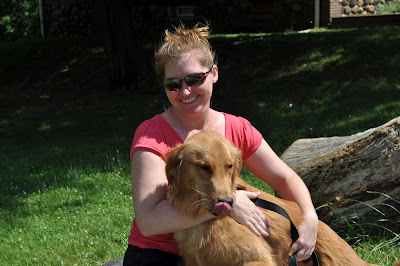 A short video talking about some of the things that we do at ECAD!
Posted by ECAD at 12:34 PM No comments: 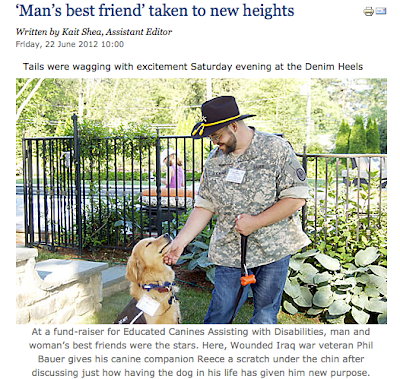 Boots Tails fund-raiser for Educated Canines Assisting with Disabilities (ECAD), which raised approximately $100,000, at a private estate in town.
At the completion of their two-year training, ECAD’s service dogs are able to perform more than 80 commands, performing tasks such as opening doors, pulling wheelchairs and retrieving items for people with any number of disabilities including autism, heart conditions and Post Traumatic Stress Disorder (PTSD). Such specialized training costs approximately $25,000 per dog, prompting Saturday’s fund-raiser for the nonprofit organization, which was established by Dale and Lu Picard in 1995 to educate and place service dogs with disabled people.
Doing this allows for the people to have greater independence and mobility and, according to Mr. Picard, ECAD, was created by accident, thanks to his wife, Lu.
After her father suffered a stroke, Ms. Picard trained her dog to help him get to his feet and assist with his balance. When she realized the transformation the dog had made in her father’s quality of life, Ms. Picard traveled to California for a six-week dog training course and shortly afterward established ECAD with her husband.

The couple knew their organization was successful when Mr. Picard said the doctor of one of their first clients related that the client’s service dog had saved his life at least half a dozen times. The dog was able to pick up on the changes in his master’s body language and posture that indicated heart failure, then cued others to the danger, he explained.
The couple’s work soon caught the attention of Sam Ross, who wanted to add a dog training program to Green Chimneys, his animal-assisted therapy school in New York. After meeting the Picards, Dr. Ross immediately provided them with a contract, feeling that service dogs could significantly help challenged youth, like his students.
“Today we have 225 dogs out there working with disabled people, all trained by kids” from alternative schools similar to Green Chimneys, Mr. Picard said.
At-risk children and teens with a variety of emotional problems now provide the two-year training of ECAD’s service dogs at six alternative schools throughout Connecticut and lower New York.
Given that the youth trainers, the client and the dog each benefit from the “ECADemy” program, “It’s a positive win for everyone,” Mr. Picard said. The youth are given a sense of control and accomplishment, the client is provided with greater independence, and the dog has both a purpose and a companion.
As ECAD has evolved and grown over the years, some of its most common clients have become injured veterans, which prompted the establishment of the “Project HEAL” program in 2008.
The program was designed specifically for wounded warriors, pairing veterans with specially trained service dogs who assist them with both visible and invisible disabilities.
Phil Bauer, a Project HEAL beneficiary-turned-volunteer, attested to the success of ECAD’s programs Saturday night, accompanied by his service dog, Reece.
In 2003 while serving in Iraq, Mr. Bauer’s helicopter was shot down near Fallujah. After surviving a 200-foot drop, his legs were trapped under the fallen helicopter, eventually resulting in the amputation of his right leg below the knee. After suffering from both his physical injuries and PTSD for several years, Mr. Bauer said he eventually found ECAD and immediately “fell in love” with their ideology.
Today, two-and-a-half years after being paired up with Reece, Mr. Bauer said his life has completely changed.
“If you get close, [Reece] gets in a position to keep you at a safe distance so I feel more comfortable,” he said. The canine can do “anything from being able to fetch and retrieve my prosthetic leg to turning on lights for me.”
“I can be an incredibly emotional and passionate person,” Mr. Bauer said. “If I start to get angry or fixated ... Reece tends to get goofy which then forces me to break [the fixation]. Once you get that bond built, the dog wants nothing more than to make you happy.”
Having a service dog has brought purpose back to his life, Mr. Bauer explained. “I have more to actually get out of bed for. This gave me back a part of my life I felt like I lost.”
Former Eastchester, N.Y., police officer Lee O’Brien-Rothmann, who now assists ECAD with its social media, has had a similar life-altering experience.
After an incident in the line of duty caused Ms. O’Brien-Rothmann to suffer extreme PTSD, she began to research service dogs and discovered ECAD.
“I didn’t leave the house for two years. Once I came into ECAD, it was like my whole world was open again,” she said.
The organization’s positive energy had an immediate effect, as did her service dog, Brady, she added.
“I went from being housebound to back out to do things,” including traveling all over the country with her canine companion. “With Brady, everything was seamless,” Ms. O’Brien-Rothmann explained. “He gives me all the confidence in the world.”
Avril Dennis, a licensed clinical social worker who has partnered with ECAD for nearly 13 years, said she has “hundreds and hundreds” of success stories relating to the organization.
Ms. Dennis began her relationship with ECAD after taking a position at The Children’s Village, one of the alternative schools whose youth help train ECAD service dogs.
When the dogs were introduced to group therapy sessions at the school, student attendance increased, Ms. Dennis said. “Meaningful dialogue went up,” along with the quality of relationships between adults and youth.
Currently, said Ms. Dennis, there is a five-dog, 16-person animal assistant therapy team at The Children’s Village residential campus in Dobbs Ferry, N.Y.
Working with service dogs has generated breakthroughs for many students, she said.
“I’ve had kids who won’t talk to me unless the dog is in the room,” Ms. Dennis said, adding that the dog is a barrier that makes children feel safe, which is crucial at an institution where the majority of students have been through trauma and displacement, she explained.
Ms. Dennis, who suffers from an autoimmune disorder and has a service dog of her own, Blondie, said ECAD’s success rate is a result of the organization’s fierce commitment to their cause. Awareness and education regarding service dogs has increased significantly over the past few years and “ECAD has played a huge role” in that expansion, she said.
Carrie Picard, the daughter of ECAD’s founders, and the organization’s marketing and social networking managers said ECAD has grown considerably since its establishment and will need to evolve even further.
With an increasing need for service dogs, the organization needs to “step up [their] game” in order to fulfill those needs, she said. The challenge will be obtaining more space, more dogs and more funding.
Despite those obstacles, she explained, ECAD plans to take the organization “to the next level.”
For those who want to help ECAD, visit ecad1.org for more information.


kshea@greenwich-post.com
Posted by ECAD at 1:33 PM No comments:


An interview with Carrie Picard, about her family's service organization. ECAD's mission is to enable people with disabilities to gain greater independence and mobility through the use of specially educated dogs.

Tell us about how your family started ECAD.  What was the inspiration and when did you start it?
ECAD was founded by Dale and Lu Picard in 1995 following a very personal experience. Lu's father suffered a stroke. In addition to the difficulties in walking and maintaining balance, he was also depressed because he had to rely on others to do things. Lu trained the family pet to help her dad. He would hold the leash, and upon command, the dog would pull Lu's dad to his feet and then brace him so he would not fall. Lu saw an immediate change in her dad's mental outlook. He and the dog became inseparable. He felt comfortable relying on the dog in ways that he could not with his family. Lu thought, I can help so many in this way. She and Dale followed this dream to the great success that ECAD is today.

How long does it take to raise and educate the dogs to work with people?
It takes two years to educate an ECAD Service Dog beginning when the puppies are around six weeks, although they will begin interaction with humans shortly after birth. The dogs will attend kindergarten, grade and high school sessions at the schools where ECADemy is part of the curriculum. They graduate and are paired with their partner following a two week Team Training Session at the ECAD facility in Dobbs Ferry.

Tell about the ECADEMY.
The ECADemy Program was established in 1997, first at Green Chimneys in Brewster, NY, and subsequently at five alternative schools in Westchester County. ECADemy is part of the curriculum at these schools. The program explores the strength of the human-canine bond. The students, many of them society's most vulnerable, are trained to educate the Service Dogs thereby learning skills for life and skills for employment.

How many kids participate in how many schools? What have the results been?  For the kids and for the dogs?

Over 800 students have participated in the ECADemy Program so that is about 60 a year. All of these children and teens have shown a marked improvement in controlling their frustration, anger and other socialization problems. There is also a written curriculum. The Picards remain in touch with many of their students. A high percentage of these students return to their families and their communities with a healthier attitude and are able to complete school, get good jobs, even run their own business.
ECAD's Service Dogs will have interacted with a number of people while being educated. This prepares them to respond to commands from more than just one person. Anyone who has observed a session at ECADemy will see the eagerness with which the dogs attend class. This eagerness is demonstrated by much wagging of tails. Both students and dogs know they are doing something worthwhile that will benefit others.

The pup's are here 3 boys and 2 girls! Mama and pups are doing well and Jazzy is very proud of her pups!  They are full brother and sisters to The Designer Litter pups.  Way to go Jazzy and good luck to the service dogs of the future! 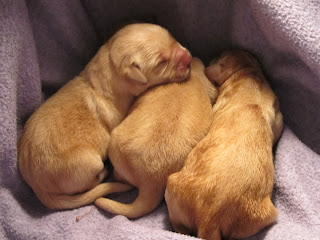 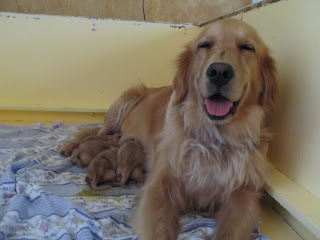 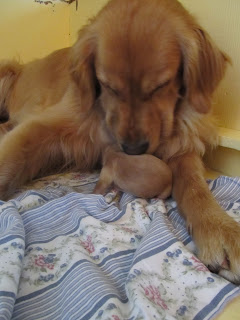 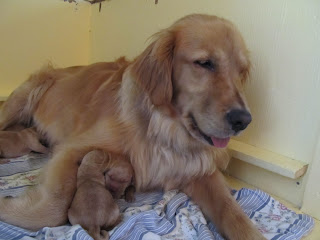 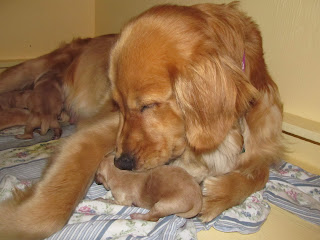 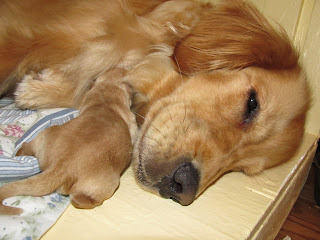 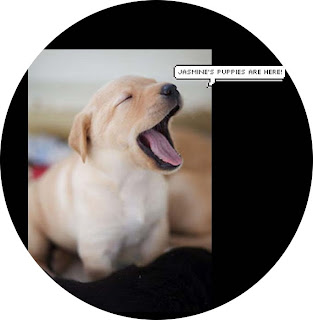 Jasmine's first puppy joined us at 2AM this morning a little BOY! So far we have two boys and two girls updates to follow....
Posted by ECAD at 10:00 AM No comments: 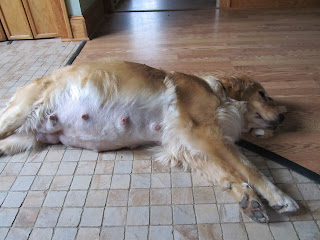 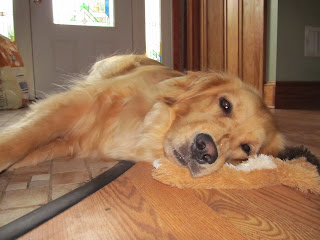 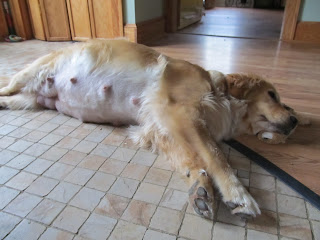 Thats up to Jasmine ! 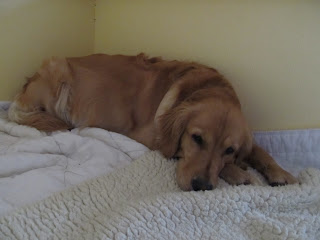 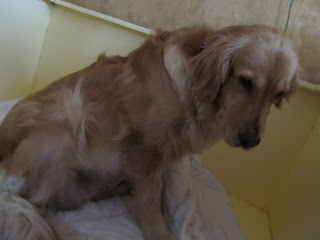 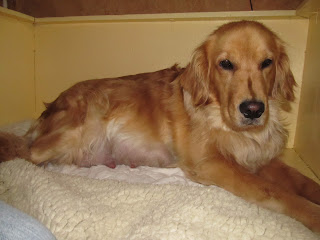 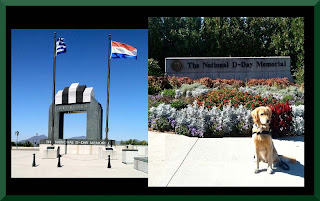 ECAD Service Dog Brady at the DDay memorial in Bedford,Va. Never Forget our troops sacrifices that have given us our freedoms we enjoy today.
Posted by ECAD at 10:59 AM 1 comment:

We have the honor to inform you that Until Tuesday has been selected as a finalist in the 2012 International Latino Book Awards (ILBA)within the categories of "Biographies" and the overall "Mariposa Award." The ILBA ceremony will be held in NYC on the evening of June 5 (next Tuesday). It's free to attend but RSVPs are required (see attachment for more details).

That same evening is the 2012 Audie Awards in which we are also a finalist (Biography/Memoir). So, Tuesday will be an eventful night (and Best Dog) regardless of the outcome.

We hope you had a restful and reflective Memorial Day.